It is astounding that in 2020 we still debate whether we should celebrate “Columbus Day,” or, like it is known in Latin America- “el día de la raza.”

Columbus presence in the “Americas” is conspicuous. I don’t think it possible to get an official count of the plazas, statues and monuments in honor of “Colón”; or in the Anglo version (ironically created to please a growing Italian population in the United States) “Columbus”. The whole Western Hemisphere is dotted with such places.  October 12 used to be commemorated as “Discovery” day.

This is quite ironic considering that the Genoan navigator Cristoforo Colombo, went to his grave still believing (or at least claiming) that he had in fact found the westernmost part of the Indies. In fact, our hemisphere today carries the last name of Colón’s friend, Amerigo Vespucci, who is credited with being the first one to prove that the Europeans had arrived to a whole hemisphere unknown to them- “a New World”. Of course, Vikings had been to the Western Hemisphere and briefly settled centuries before 1492, but that knowledge was eventually lost to them and not shared with the rest of Europe. The Chinese may have visited six decades before Columbus- and that is a big “if”. But even if they came, they did not return, and their records were lost with the destruction of their great armada and the purge of Muslims from the imperial bureaucracy.

Columbus was lost. But he did return to Europe with tales of wealth (which Castile and Aragon desperately needed); and a population “gentle and docile” and ready to become subjects of the King and Queen; and eager to embrace the “Faith,” a win by all measures. Colombo’s reports promised wealth and economic expansion, and more souls for Christ at a time in which religion was becoming the ultimate division between Europe and the rest of the world, and in particular, a divide between Christian European kingdoms and the Ottoman Empire. Their struggle wasn’t really about religion (at least not  initially), but about control of the Mediterranean world. They were but two non-monolith sides fighting over control of the Mediterranean super highway- just like Persians and Greeks, and Romans and Carthaginians, to name a few, had done before.

Columbus’ voyage in 1492 shifted the center of power of half a world, from the Mediterranean to the Atlantic. The Atlantic became the super-highway leading onto the Global Era.

We know what came afterwards. An initial Spanish conquest that counted with the support of tens or perhaps hundreds of thousands of indigenous peoples. After all, the Europeans didn’t arrive to a paradise that didn’t know hunger, oppression, or war. No, they arrived to a place populated by complex and advanced cultures and societies, including vast empires. And this is important to highlight. There were millions of peoples and thousands of civilizations when the Europeans ARRIVED to the Western Hemisphere. Thus, to continue using “discovery” to refer to their arrival is a negation of indigenous peoples’ most basic humanity. And words matter, for denying their humanity was also an excuse to subjugate them.

But back to the wars of conquest, the initial European campaigns would’ve not been possible without identifying aggrieved groups and warring factions, and making Euro-Indigenous alliances to overthrow established dynasties. It is the oldest story in the world.

The Spaniards and other Europeans were also aided by the fact that the Western Hemisphere’s ecological isolation made for the indigenous’ immune system to initially be unable to withstand the diseases brought by a people used to the plagues of Afroeurasia. But their numbers bounced back, they didn’t disappear, and they still here. And this should be a story well-known.

The Europeans were (at first) completely uninterested in eradicating or removing the indigenous population- after all they were a RESOURCE. They were more into terrorizing them into submission and making alliances with the indigenous nobility to cement their presence and “right” to rule. And yes, one can rightly call the conquest, colonization, and maintenance of the empires; TERRORISM. Terrorism with the intention to subdue the indigenous population. Terror to establish a system of privilege; and Terror to preserve the system. Of course, that was just but one side of the coin. No system can sustain itself on fear only. 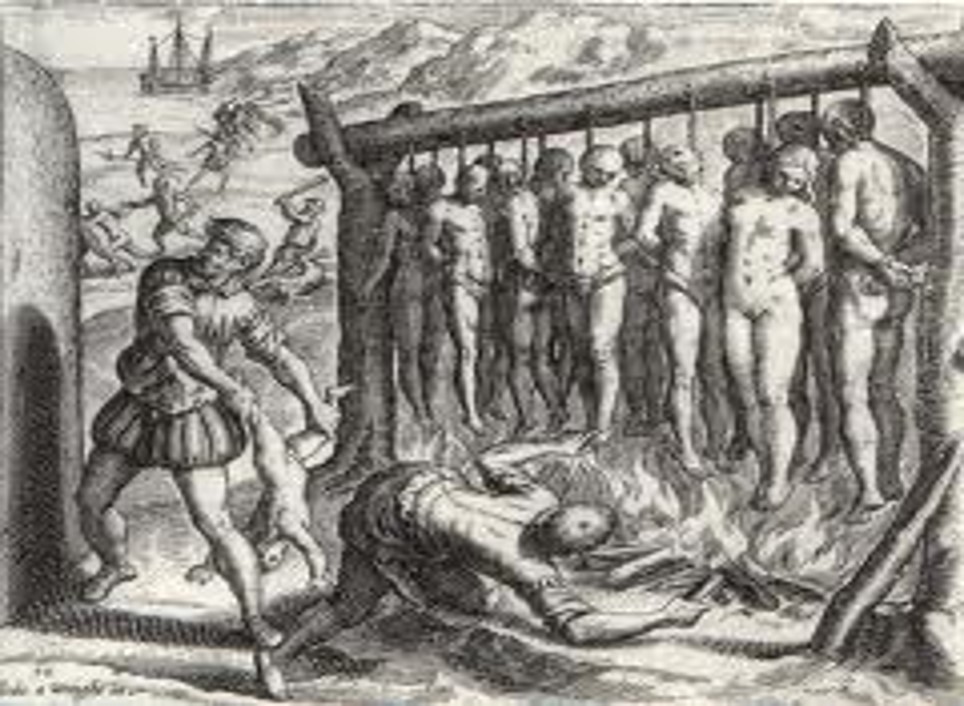 With the Europeans came slavery, but a  type of slavery never seen in the world. One that by the end of the 1600s had come to be defined by skin color. Before that, slavery was the most common form of labor- and anyone could find themselves as a slave for an infinite number of reasons.

However, after 1492- slowly but surely slavery came to be based on skin color.  Skin color became race. And from the meaning assigned to race came racism. From the now “celebrated” mixing of races (día de la raza- and the sad joke of a “melting pot” and all the Caribbean and Latin American national varieties of it) what we got was a caste system based upon racial differentiation and stratification; white supremacy; and white privilege. And the system still  intact to this day and it spreads outside Europe and the Western Hemisphere because 1492 was the beginning of the global era. That year marked the beginning of the first European global empire, soon to be followed by the Portuguese, the Dutch, the French, and the English.  And those global empires adopted as their morphing common denominators , as their easy to repackage basic building block,  European- Caucasian- Latin- Anglo-American- Christian- White supremacy and privilege.

That is the world “created” by Europeans after 1492. That is part of Columbus’ legacy- a Global World marked by White Christian Supremacy and Privilege and the  legal, economic, financial, political and social structures that come with it and make it possible.

But, did Columbus start it? Is he responsible for the genocide, for slavery, for modern racism, for white Christian privilege? Yes and no. He is just part of a process. The Europeans were coming one way or another- their lands were exhausted; their access to Asian and Indian markets compromised. They were already engaged in exploration and the Portuguese had rounded Africa and into the Indian Ocean they had gone. In the process of finding that route to India, the Portuguese had engaged in the African slave trade- initially to finance further exploration. But by the time they had reached India, the slave trade was already too profitable to ignore. The means had become the end.

Columbus plays just a small part in many historical processes. Celebrating him is wrong, very wrong. Demonizing him is also wrong for it exculpates the rest of Europe and its allies; the Church(es); the emergence of capitalism and the continuation of a caste system based on White Privilege.

Though it is easier and simpler to say, “fuck Columbus,” I rather understand the processes that made Columbus’ voyage and the arrival of Europeans to the Western Hemisphere inevitable and the system (the world) that it created, so we can start to dismantle it. So, I’m not so much into tearing down the monuments. Rather I would like to see them turned into into reminders of everything that is still left to do so we can have a world without racial inequality and predatory capitalism.

And, as for renaming “Columbus Day” and “Día de la raza,” as  “Indigenous Day”, well, that is not not enough. A good beginning but not nearly enough. I just hope that as more and more states and countries move towards it- these crimes against humanity are not forgotten. For forgetting would allow for the system of white supremacy and privilege, his true legacy, to remain intact.