Puerto Rican Veterans Pay it Back

I have spent this week interviewing Puerto Rican veterans in Boston (something I have been doing for almost two decades now across the country and the island). The veterans who were willing to share with me have stories worth telling. Though each story is unique they also share many commonalities.

Many joined the military because of economic imperatives. Some joined because it seemed exciting. Some did because of a sense of patriotism. Others were drafted and did what was asked of them or what they thought it was their duty. These veterans have the most disparate political and philosophical affiliations- yet they come together united by their military experience and sense of puertorriqueñidad.

Some resent the discrimination they faced in the military, some say they never experienced any. They come from the most diverse socio-economic backgrounds. The majority were extremely poor when they were drafted or joined the military.

I have talked to grunts and support personnel, enlisted men and officers, marines, navy, army, and air force personnel. Their combined service (in this group) spans from Vietnam to Iraq.

It is a diverse bunch but there is a common denominator here.

They all feel they have a debt they need to pay back to society. Even those who think it wasn’t fair that they had to go and serve without having an opinion on it- have made it a point to pay it back.

Either as part of community or through veterans’ organizations these men and women have made a point of taking care of their communities. Specifically, veterans help each other in many ways, from the simple and therapeutic act of listening to another veteran’s story to finding employment, clothing or housing for veterans in need.

Every single combat veteran I talked to has PTSD. They wanted to talk about it. Some recognized it early on, for others it took decades to seek help. All of them, after recognizing their trauma made it a point to help other veterans to come to terms with their own PTSD.

They are also involved with the community in general. And within their communities they became leaders, organizers, and advocates. Many made this observation: we earned “this” for us and all Puerto Ricans. They have dedicated themselves to carve out spaces for the Puerto Rican community using their service and the leadership and organizational skills learned in the military to get things done.

Some of them made do with the skills they learned while serving and carved out a dignified life for them and their families. Some became activists, rain makers. Some went to Ivy League schools (3 Harvard alumni in the small batch from Boston). All of them, ALL OF THEM, have been trying to pay it back to society. 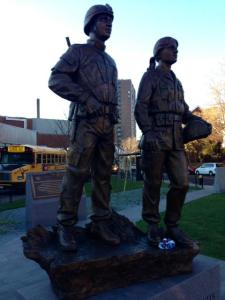 Pay back what? You may ask. My camera woman could not help but to be impressed by these veterans’ stories. “What they have done with their lives, what they have accomplished- guau.” Especially those who were very poor when called into service or joining have a feeling that they need be involved with their communities. As incredible as it may sound these veterans, the vast majority of them, thanked their military service for providing them with tools to make a difference, with opportunities to escape poverty, for becoming “better men”, independent, and even for showing them what discrimination is so they could fight it.

So, paying it back is only half of the story. Their story is one of overcoming extreme poverty, prejudice, and the trauma of war. They have chosen not to be bitter about any of this but to push forward and strengthen their communities.

I’m still processing what I have learned in this research trip but as I drove back home one thing became clear to me. The Puerto Rican veteran population in the United States is a pillar and main engine of the Diaspora. By sheer numbers they rival the agricultural workers’ immigration we always read about. Judging by the impact they have in their communities we have an untapped economic and socio-cultural history waiting to be discover. It is about time we recognize their service in an out of the military and that we give their History the prominence it deserves. It is the least we can do to pay it back to them.