Excerpts from Soldiers of the Nation (Chapter 1)

Birth of a Nation

Puerto Rico needs to reform its public education, conveniently Hispanicizing it, and to this end it is necessary to get rid of the professors born in this country . . . [and] to ban the people of this country from certain positions. Those born in this province should only be allowed to occupy the most subaltern positions, and only after unequivocally proving their unyielding españolismo.  —José A. Gautier Dapena, Trayectoria del pensamiento liberal 2

For more than three centuries Spain relied on local militia to keep Puerto Rico within its fold and to provide a manpower pool and a staging area from which to quench revolts in other parts of the empire. However, after the failed insurrection against Spanish rule, known as el Grito de Lares of 1868, Spanish colonial authorities moved swiftly to dismantle the local militias manned by los hijos de este país (natives of the land). The late Spanish colonial project in Puerto Rico, especially after el Grito de Lares, was marked by increased political repression and military exclusion.3 Banning thousands of Puerto Ricans from the military and politically subjugating the island-born elites were self-supporting strategies aimed at keeping the island under Spanish control.

The demobilization of the Puerto Ricans following the Lares revolt is of paramount significance. Historian Florencia Mallon has argued that during periods of crisis, subaltern groups get the opportunity to strengthen their political stand and gain more inclusion and participation in developing or redefining the nation and its institutions, either by being included in political coalitions or by being mobilized for war.4 Focusing on the creation of national discourses and identities and how they alter state formation, Fernando López-Alves argues that political and military mass mobilization of peasants and lower classes, the type, duration, time frame, purpose, and who leads such mobilization affect the creation of a region’s polity and lead to a higher or lower degree of democracy within a given state.5 Both scholars agree that as marginalized groups participate in political and military mobilization, they have a better chance of becoming part of the hegemonic group in a given society.

In the case of Puerto Rico, we have a peculiar situation due to its colonial situation and the preponderantly military nature of the colony. On the one hand, we have a major nation seeking to demobilize those born on the island while also engaging in the political repression of the local criollo elites. The nation and its colonial bureaucracy had a mutually supportive relationship with the peninsulares (the Spaniards born in the Iberian Peninsula). On the other hand, the criollo elites, even as they organized politically, had but a tenuous command of the lower classes and the peasantry’s loyalties. In nineteenth-century Puerto Rico, most notably after the 1860s, instead of mobilization we are presented with the demobilization of the local population while the political arena plays out more like a contest between liberal reform-oriented (and separatist) criollos in one camp and the colonial administration and peninsulares in the other. Little opportunity for broad political mobilization and the demobilization of the local population are prominent features of mid- to late nineteenth-century Puerto Rico.

In this chapter I analyze the policies followed by Spain and its colonial apparatus in Puerto Rico with regard to military mobilization during periods of crises, and how those policies affected those born on the island. What did Spain seek to gain from excluding the island-born from military service? Did military participation transform into political enfranchisement? Is the opposite true? Did the demobilization of the inhabitants of Puerto Rico mean political and socioeconomic disenfranchisement? Did disenfranchisement and displacement encourage the development of distinctive Puerto Rican national identities?

Spanish colonial policies in Puerto Rico curtailed the emergence of broad political coalitions that could seriously challenge the metropolis, but those same policies negatively impacted Spain’s control over the island as well. Clearly Spanish policies aimed at demobilizing the Puerto Ricans can be seen as an effort to destroy the basis of a potential rebel army while also providing cheap labor for the incipient export-oriented capitalist agricultural enterprises. However, the demobilization of the Puerto Ricans was also intended to impede the emergence of distinct national identities that might be used as a battle cry against Spanish sovereignty. The combination of these policies of exclusion and demobilization weakened the criollos and liberals politically as the colonial administration intended. But these policies also highlighted the differences between peninsulares and those born on the island, and eventually they stimulated the emergence of Puerto Rican national identities and the anti-Spanish feelings so feared by Spain.

Get the book with a discount at: 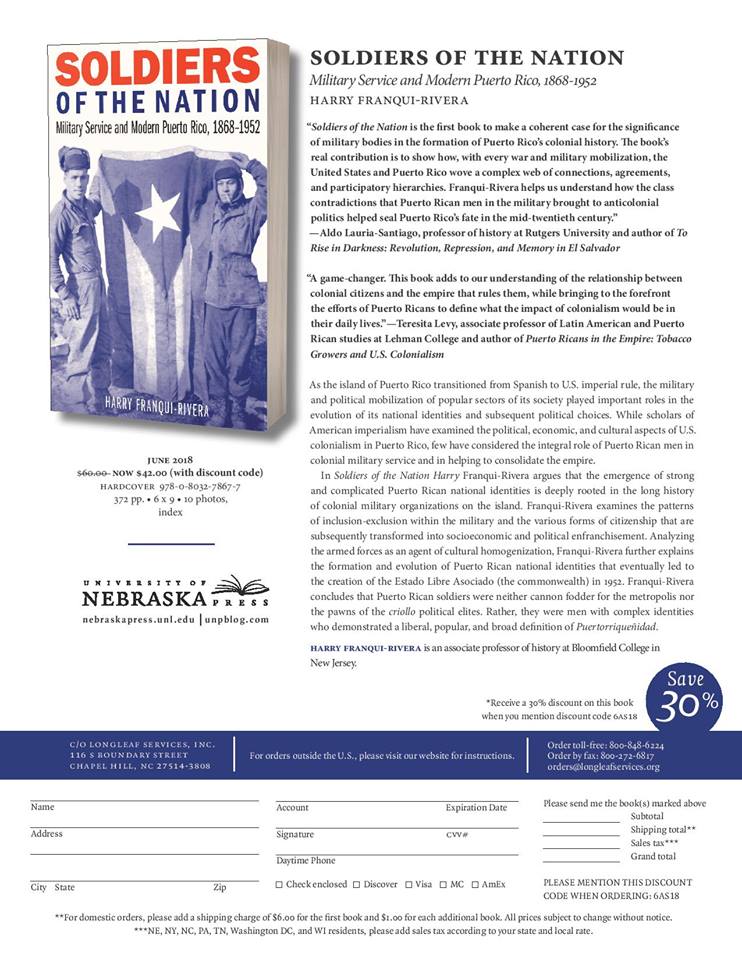 [i] “Puerto Rico needs to reform its public education conveniently Hispanicizing it, and to this end it is necessary to get rid of the professors born in this country… [and]to ban the people of this country from certain positions. Those born in this province should only be allowed to occupy the most subaltern positions, and only after unequivocally proving their unyielding españolismo.” Dapena, Trayectoria del pensamiento liberal, 46-47.

[ii] Note on translation and language usage: All translations are mine unless otherwise indicated. I have tried to use the original Spanish version for titles, offices and names throughout this narrative as long as it did not cause confusion to do so. Translations and abbreviations are offered and used throughout the text but their use is limited.