It is no secret. I don’t like Trump. In fact, I’m disgusted by his antics and rhetoric. However, he is not the first person to bring homophobia, racism, xenophobia, misogyny and bigotry into our political discourse. He is neither the first one to revel in ignorance or to glorify violence. For decades now, right wing media outlets have peddled fear and hate and promoted violence 24/7. Trump’s bigotry is not new. But Trump brings hateful discourses to another level. He has brought together different (and sometimes contradictory) conservative and bigoted narratives using Toxic Masculinity as his movement’s lowest common denominator. 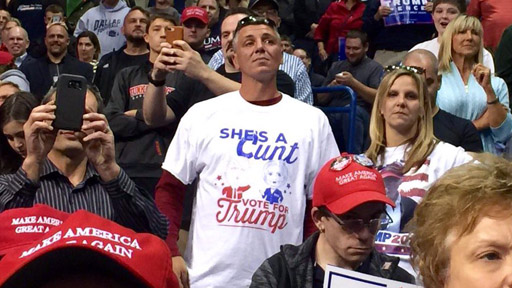 The site geekfeminismwikia.com describes Toxic Masculinity as “one of the ways in which Patriarchy is harmful to men. It refers to the socially-constructed attitudes that describe the masculine gender role as violent, unemotional, sexually aggressive, and so forth.” I agree with the definition but I would like to add that toxic masculinity is not just harmful to men but to women and society as a whole. Moreover, there are women who perceive Toxic Masculinity as the paramount of masculinity, as the #WomenWhoVoteTrump tread painfully shows.

I have a visceral reaction to Trump and his followers because I grew up in an environment dominated by Toxic Masculinity. It was a violent space. Talk was tough. Peacocking was extreme. Fist fights were a daily event in the intermediate and high schools I attended. Teenagers and young adults beat up kids frequently. Young adults, mostly school drop outs, preyed on underage school girls. Sometimes they talked them into sex, sometimes they forced them. It was always rape.

Young adults asserted their masculinity (to attract underage girls) by performing violence. They would look for, or make up, any excuse so they could verbally and physically attack males of the same age as their prey. Ironically this seemed to work too often. The more aggressive they behaved the more attention they got from underage females; and the more respect (or fear) they seemed to command from younger males.

As a male growing up in this kind of environment you are left with two options. You can either take the abuse and keep your head down, or fight back. Or at least that is what I thought. I tried them both. I can’t even count how many times I was in a fistfight during my school years, or how many times I was beaten by older students or several young adults. It was a violent place, as I have mentioned- and I hated it.

I hated that I was becoming “them”.  So I stopped going to school and spent two years hitchhiking to the beach or playing pool at college bars. I worked at a factory for several years. Many of my coworkers, well into their 30s and 40s had the same kind of discourses and attitudes I’ve tried to leave behind by dropping out of high school. These men were conservative, uneducated, ignorant, violent, extremely misogynist and rabidly homophobic.

I eventually earned a GED and attended college. College exposed me to different masculinities which I understood as the result of natural progression, being exposed to more diverse experiences, and having access to education and resources. My college experience helped me explain the male toxicity I had experienced.

I tried to rationalize those young adults’ actions (and mine). Why would they hang out around schools, preying on underage girls and visiting violence upon us?  The answer I came up with? They were caught up in a cycle of abuse. And they had been taught that they had nothing else to offer or to hope for. They were uneducated, many came from the lowest socio-economic sectors of our society. Their only way to “shine” was by being violent males, by making other males fear them. That was the only way, for many of them, to assert their manhood.

Of course, such behavior can only take you so far and many of those who used to terrorize the neighborhood and our schools ended up in prison. Most peaked during those years- and seem to be stuck in time. They never became men. They remain in a limbo between being a frightened child and a hormonal, unstable, and violent teenager.

They never became men because to this day they can’t control their anger. They still think of women as something to be taken by force. They still equate violence with “toughness”. They still peacocking. They resent that “nerds” and “lesser men” live better lives than them. They resent strong women and in positions of power. They demand that someone “Makes America Great Again.”

I have no hate for them. I understand them, but I don’t excuse them. I also don’t want to see any of them in a position of power, much less running for the highest office in the country.  While I understand that many of the toxic men I’ve met in my life had limited options and became victims of their own actions- I can’t, not even for a second, understand Trump. He had all the advantages. He had all the opportunities to get an education- to expand his mind. He did not need to perform violence because his social class and wealth inoculated him from it and even afforded him to pay others to perform it in his behalf.

Yet, Trump chooses to be violent, to demean, to step on others, to incite violence. His discourse attracts the most deplorable people in our society, from xenophobes to misogynists and everything in between. But the glue keeping his followers together, both men and women, is Toxic Masculinity. The more Toxic Trump behaves the more his followers dig in.

The rabid responses of Trump’s followers to allegations of sexual assault (and to Trump’s own words) are painful reminders that Toxic Masculinity exist because a large sector of our society is invested in preserving it. Hence, Trump’s followers mock  sexual assault victims with hashtags such as #HillaryGropedMe and by asking Trump to grab their pussies and talk dirty to them. They tell victims of sexual assault: “Fuck Your Feelings”.  They react to a map showing Trump losing every single state if only women voted with calls to  #repealthe19th. Even worse, #repealthe19th includes twits from women declaring that they would gladly give up their right to vote if it meant Trump would become president. 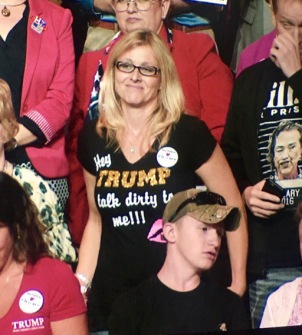 These are the toxic men and women who want to see Trump as president. They want to recreate that “high school” microcosm in which violent men asserted their Toxic Masculinity by assaulting women and ganging up to beat up males who did not conform to their toxicity. They want to have a society in which women know that their place is at their violent husbands’ feet. Trump and followers want this to be our reality and the drive behind our domestic and international policies. This is what we have to face, what we need to stop.