The sine qua non in discussions about nationalism and national identities in Puerto Rico is without doubt, El Grito de Lares of September 23, 1868, the biggest revolt against Spanish rule ever staged in the island.[1] This revolt occurred almost in unison with the Glorious Revolution (La Gloriosa or Revolución Septembrina) in Spain (19-27 September, 1868) and the Grito de Yara (October 10, 1868), which started the Ten Year’s War and a three decades long struggle for independence in Cuba.

On January 6, 1868, prominent Puerto Rican separatists exiled in New York, under the guidance of Ramón Emeterio Betances, founded the Comité Revolucionario de Puerto Rico. They aimed to overthrow the Spanish regime in the island and to create a democratic republic. The revolutionary committee proceeded to organized cells in the island for this purpose and to secure weaponry for the rebel army.[2] A series of setback doomed the plans of the revolucionarios. They managed to secure 500 rifles, six canons, ammunition and the small transport ship, “El Telegrafo” to arm the revolutionary army; however, their ship was confiscated in Saint Thomas.[3] Betances, who had planned to land in Puerto Rico with men and weapons the first day of the revolution, set originally for September 29, was detained in Santo Domingo and never made it to the island.[4]

Meanwhile, the leaders in Puerto Rico faced problems of their own. On September 19 a rebel agent was apprehended in the western city of Mayagüez and the next day a miliciano in the northwestern town of Quebradillas informed his commander of rebel plans in Camuy. Capitán General Julián Juan Pavía ordered Spanish troops to full alert. In the first hours of the morning of the 21st Spanish authorities detained the rebel leader Manuel María González and searched his house. The Spanish authorities found a list of members of the rebel cell and a copy of their reglamento. The Camuy rebels who were not arrested moved to Lares and warned the rebel cell in that town. From Lares, messengers were sent to alert the rebel cell in Mayagüez that their plans had been compromised and of the need to launch the rebellion as soon as possible. They also wanted the Mayagüez’s cell to alert the rest of the cells throughout the island. Reckoning that speed was of the essence, the leadership of the rebel cells in Camuy, Lares and Mayagüez decided to launch their revolt six days before originally planned.[5] 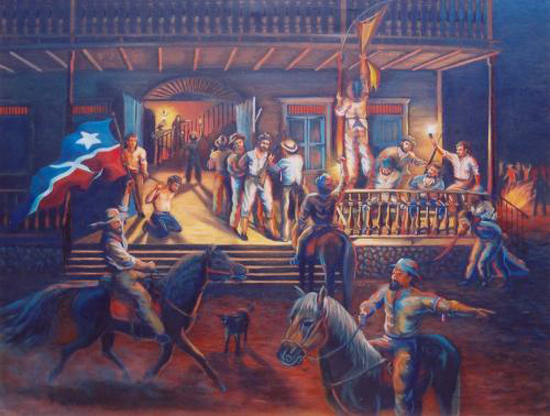 On September 23, 1868, hundreds of rebels started to converge at the farm of Manuel Rojas, a coffee grower in the mountain town of Lares and rebel leader. On their way to Lares the rebels exhorted slaves and jornaleros to join them in some cases threatening to kill them if they did not do so.[6] That evening the rebels marched into the town itself and took it without resistance. They proceeded to form a provisional government of republican character. The Republic of Puerto Rico, with a president and a cabinet appointed by the chief military leaders present in Lares, Manuel Rojas and Juan de Mata Torreforte, was officially established on the morning of September 24.[7]

Rojas and Torreforte instructed the new government to recruit and organize more rebel soldiers and to secure funding by forcing the merchants to loan monies to the republic.[8] By decree, the rebel government declared null the hated jornalero (passbook) system that forced landless peasants to work as peons, and promised freedom to those slaves who joined them in the fight against the Spaniards. The rebels also welcomed foreigners to join their ranks and become patriots of the republic. Another decree gave Spaniards in Puerto Rico three days to swear allegiance to the new republic or to leave the island if they did not. The decree also warned of extreme repercussions if the Spaniards decided to stay and did not support the rebels and the republic.[9]

The chief rebel commanders, Rojas and Torreforte, proceeded to name the officers of the Ejército Revolucionario, which at that point consisted of roughly 600 men. They named eight brigadier generals plus colonels for the infantry, artillery and cavalry. These colonels were quickly promoted to generals. That the rebel leadership appointed so many generals and colonels for such a small number of rebels suggests that the leaders believed they would be able to gain popular support.

Late in the morning of the 24th, the rebels proceeded to the town of San Sebastian del Pepino. The commanders of the milicias disciplinadas (local militias) in Pepino, Lieutenant Manuel Cebollero and Alférez Eusebio Ibarra had spent the previous night organizing slaves and jornaleros into a fighting force to join the rebel column coming from Lares. They had also promised the rebel leadership that their milicianos would join the rebellion.

Later that morning, roughly forty rebels on horseback enter Pepino’s plaza shooting and chanting “death to the Spaniards and the Queen”, while exhorting the milicianos to join them. To their surprise, and that of the Spanish authorities present, the milicianos responded to the rebels with intense fire ignoring the calls of Cebollero and Ibarra. More rebels continued to pour into Pepino, but their efforts bore no fruits against the effective fire of the milicianos, and the town’s civilians who fired rifles and guns and threw dynamite against them from the rooftop of buildings surrounding the plaza. The battle lasted over an hour before the rebels, repulsed twice and driven off the Plaza by the milicianos, decided to head back to Lares.

The confrontation left eight rebels dead and two milicianos wounded. Fighting against milicianos and civilians, the rebels lost the only engagement of the revolt. Disconcerted by the unwillingness of the milicianos to join them and recognizing that without them on their side, they could not possibly defeat the regular peninsular troops in the island, the rebel army quickly melted away. Scattered in the mountains and with no hope of a general uprising or aid coming from the exterior, the rebels who initially escaped capture eventually surrendered. Over 500 rebels found themselves imprisoned. Eighty died while in custody due to poor sanitary conditions. Seven were sentenced to death, but by virtue of a general amnesty, all rebels were set free by January 1869. [10] 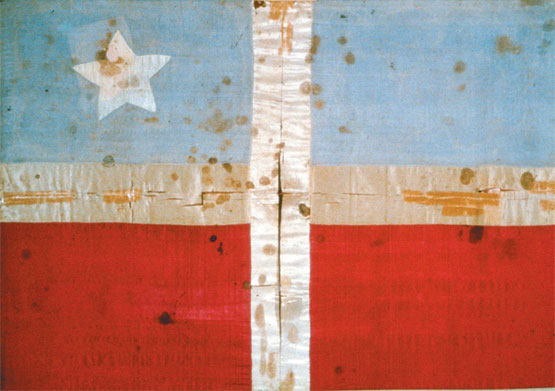 [1] The Glorious Revolution culminated with Queen Isabella II deposed. She was replaced by the Italian prince Amadeo de Savoy who lasted two years as the head of a constitutional monarchy. He was followed by the First Spanish Republic which lasted roughly two years (1873-74).

[6] Those threatened were the slaves and jornaleros working for landlords who were not part of the rebellion. The rebels apparently killed Agustín Venero, a freed black, for refusing to join them. See; Jiménez de Wagenheim, El grito de Lares, sus hombres y sus causas, 170-74, and; Gautier Dapena, Trayectoria del pensamiento liberal, 108.